A huge well done to all of the Prince Rock children who participated in the Plymouth SSP Primary Cross Country 2017 competition. We are all very proud of your hard work and determination. Here is an overview of the event from the PSSP:

"The annual Plymouth School Sports Partnership Cross Country got underway this year and although it was damp underfoot and chilly, it made for perfect cross country conditions. With eight races in total the 1000 plus runners arrived ready to take on the challenging course.

First up were the younger girls and St Edwards C of E took the first trophy of the season with 54 team points, closely followed by last year’s winners Oreston (64) and Hooe with 72. Whilst in the Y3/4 major girl’s category Bickleigh Down took an unbelievable 1st, 2nd and 3rd leading their team to amazing win with just 17 points in total. Old Priory will be joining them at next year’s county cross country finals in Torbay with 48 points, whilst Leigham just missed out with 67 team points.

The first of the boy’s races saw Hooe finish in first with a very impressive 41 points, bearing last year’s winners St Edwards into third, whilst this year’s second placed team and county finalists are Oreston (61). In the major category Finley from Leigham led the way helping his team secure a county place, with joint first placed team Bickleigh Down, who both scored 45 points. Bickleigh however took first overall due to their fifth placed runners score and will again hold on to the coveted trophy. Goosewell and Woodford finished joint second and miss out on a county place due to Leigham and Bickleigh’s amazing performance. Compton took third in the Y3/4 Major Boys just eight points behind the second placed teams with 68.

The first of the year 5/6 races saw Wembury push last year’s winners Oreston into second with 64 and 71 points respectively, and both team will go through to the level 3 county round, the first ever for this age group. Tor Bridge took the final spot with 95 team points, whilst Hooe’s Ella and Isabella deserve a mention finishing in first and third, either side of Olive from Oreston. The major category saw Bickleigh Down dominating once again, with and amazing 35 points, which will see them and second placed Montpelier go through to the next round. Goosewell finished in third just three points behind Montpelier, however they do take home some silverware after winning three out of the four categories (Y3/4 Girls, Y3/4 Boys and Y5/6 Boys) in the warm up accumulative results, whilst Montpelier took the fourth winning the Y5/6 Girl’s warm up heats.

The boy’s races, which are always fast and furious from the start saw Oreston taking the top prize (39 points), after taking second last year. Wembury once again featured in second this time (56), whilst Hooe finished in third (62).

The final race of the day saw the biggest field with nearly 90 runners competing for the gold medal. George from Compton, who has dominated the warm up events, once again didn’t disappoint, just pipping Harry from Leigham into second. Ewan from Woodford will take the final medal of the day, however it was George and his Compton team mates who will take home this year’s Y5/6 Major Boy’s trophy with an amazing 21 team points. Bickleigh Down will once again feature in this year’s Level 3 County Cross Country Champs, taking on teams from across the region, whilst Leigham just missed out with 81 team points.

Well done to all the teams, but especially the top two teams from each of the eight races who will go on to represent Plymouth SSP at the Devon Winter School Games, which takes place on the 22nd March in Torbay. Also, a big thank you to all the leaders from Hele’s School who helped around the course and hared all the races." 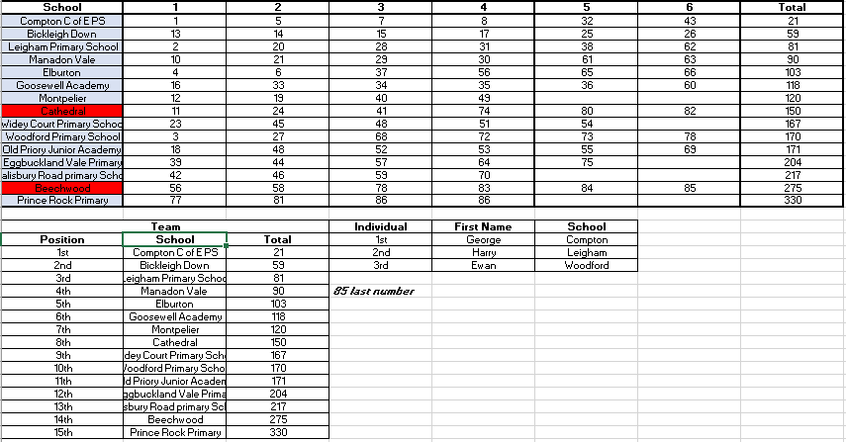 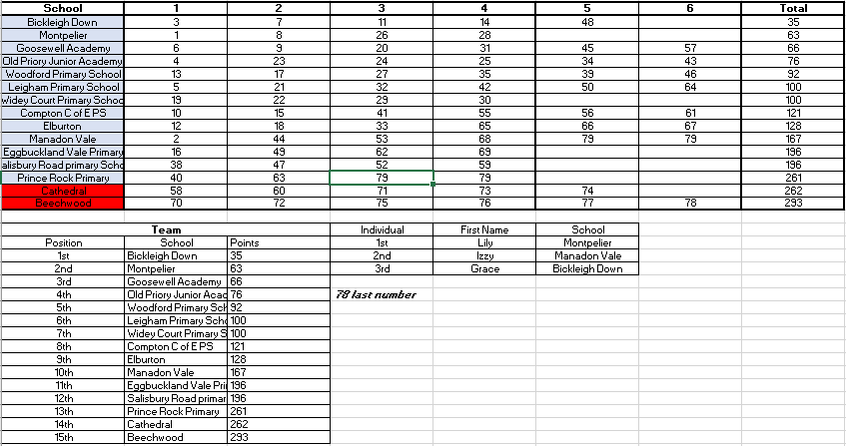